2/15/2020
Brennan Barnard
It has been said that character is who one is, or what one does when nobody is watching. When it comes to college admission, everyone seems to be watching and according to a recent survey, character counts. This week, the National Association for College Admission Counseling (NACAC) and the Character Collaborative released a research brief entitled Character and the Admission Process, which includes results from a survey of trends in college admission. For the first time, the annual survey added a section on the use of character attributes in the application process, and the results highlight what many professionals have known all along: character attributes are a factor in admission.

Thanks to growing interest in explicitly utilizing character criteria in admission decisions, the Character Collaborative was created in 2016 and now is an organization of over 70 colleges and secondary schools, researchers, professional associations and counselors with “a common interest in elevating non-academic factors and character-related attributes in the admissions process.” The mission of the Collaborative is to “change admissions practice at the higher and secondary education levels to reflect the significance of character strengths in attaining success in school, college, and work.” David Holmes, the executive director, explains that “members share the belief that character is fundamental to an engaged life, the fullest consideration of human potential, and a humane society.” The group feels that it is critical for admission offices to develop tools to assess character as a factor in the selection process and to send the message to applicants that character attributes are important. To better understand if and how this is currently done, the Collaborative partnered with NACAC, the professional association for college admission made up of over 15,000 educators from around the world.

The NACAC report, 2019 State of College Admission, includes results from their Admission Trends Survey (ATS) of college and university admission deans about the importance of various aspects of a student’s application, including character factors, in making admission decisions. The report highlights that “the factors that admission officers use to evaluate applications from first-time freshmen have remained largely consistent over the past 20 years. Students’ academic achievements—which include grades, strength of curriculum, and admission test scores—constitute the most important factors in the admission decision.”

The most recent research brief outlines how important character attributes are when admission officers are making admission decisions. Of the 447 respondents to the survey, 26% said character was “considerably important” and 44% said it was “moderately important” in admission decisions. The fact that 70% of admission officers deem character to be moderately to considerably important to an applicants’ candidacy should have students’ ears perking up.  It reinforces the reality that it matters who they are beyond a grade or test score. Empathy, resilience, integrity, selflessness—these attributes are significant and could be factors that give an applicant the bump they need to land in the admit pile.

The survey showed trends in the importance of character in admission based on the type and selectivity of school. As one might expect—and as evidenced in the table below—private colleges and universities were more likely to consider character as important and the more selective the college, the more likely character had an impact on decisions. 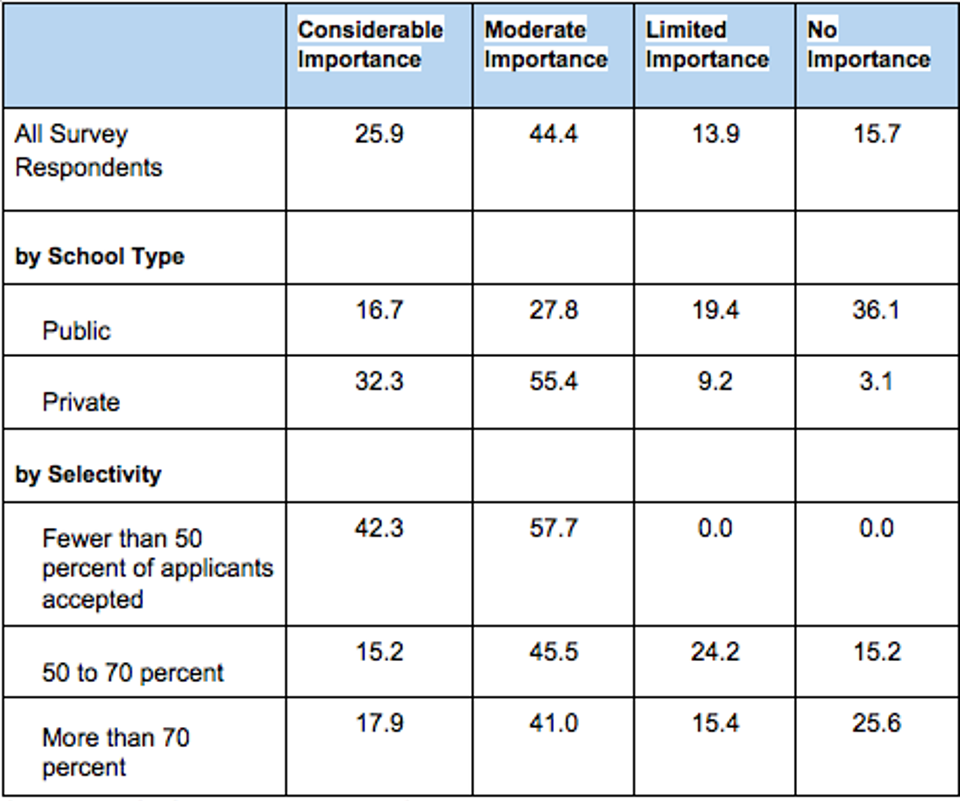 So how is character assessed for college applicants? As it is often said in admission, “it is more of an art than a science.” The reality is that in the high stakes environment of college admission, few effective tools currently exist to evaluate these attributes in an application. In the absence of a formal tool, the survey found that admission officers were gleaning character from the following areas:

Holmes, of the Character Collaborative, writes

“The results from this survey give us a first look at our current situation relative to character in admission and how far we have yet to go.  We must address several important questions. What are indicators of character attributes? How do we assess their existence in a valid way? What student actions or behaviors do we look for? How do we ensure that our assessments of character are free from personal bias or an interpretation connected to a specific social class?”

Trisha Ross Anderson is a senior project manager for the Making Caring Common (MCC) project at the Harvard Graduate School of Education. With faculty director, Richard Weissbourd, she has helped research and write several reports at MCC, including the most recent on college admission, Turning the Tide II: How Parents and High Schools Can Cultivate Ethical Character and Reduce Distress in The College Admissions Process. She says,

“While most admission leaders say character is important, many admit that it can be tough for them to assess. Our goal in working with colleges is to take some of the “guess” work out of character assessment—we want to help colleges identify, define, and measure character skills and attributes in more effective, objective, equitable ways.”

Anderson has been working on a character assessment project through a grant from the John Templeton Foundation for the past three years in high schools and colleges. In reacting to NACAC’s survey, she explains, “It is wonderful to have data about the state of character assessment in admission. The survey can tell us a lot about the immense value of character assessment and how institutions currently do it. Building from this knowledge, there is an opportunity to think together about how we can do it even better.” For example, application readers need training and guidance about what aspects of character they should ‘look for,’ how to define it, and how to measure it.” Describing the efforts at MCC, Anderson adds, “we often start by working with colleges to help them determine a specific set of skills and attributes they wish to identify in applicants at their institution. We then establish definitions and examples of those skills, and develop and implement rubrics that will allow for more objective measurements.”
Several colleges and universities are at the forefront of elevating character in admission and are actively seeking valid, tangible ways of assessment. Bill Conley is the vice president for enrollment management at Bucknell University. He explains that “the public is hearing that colleges practice ‘holistic’ admissions, but the colleges are not telling them what that means in real terms.” He adds, “for Bucknell, it means that how students act towards others, what really motivates them, and why they pursue interests really matters in the evaluation of their qualifications.”

Stu Schmill, dean of admissions and student financial services at the Massachusetts Institute of Technology agrees. He writes,

There is much work to be done to reinforce, prioritize, and assess ethical character in college admission. What we now know more overtly from the Admission Trends Survey is that character attributes are an important part of the review process. We know also that colleges nationwide are working to advance the validity and fundamental fairness of these character assessments.

Whether anyone is “watching” or not, the deeper meaning of these developments is that we should all strive to be individuals of true character. We must be good people, not because it will get us into college or win us recognition, but because it's the humane and right thing to do. Who knows? A joyful byproduct of being more empathetic or honest might be a tip to the admit pile.

Brennan Barnard
Director of College Counseling & Outreach, The Derryfield School
for The Washington Post
Back
Date Posted
No comments have been posted

Avoid Turning the College Search into The Hunger Games

Applying to colleges can be stressful. Here at Derryfield, our counselors work hard to take some of the stress out of it. We’ve put together a detailed PDF to give you some helpful tips on how to approach the admission process. Take the next steps on your college journey and get our detailed PDF by clicking the link below.